Blandford Forum Town Council is the parish authority for the town of Blandford Forum and has an estimated population of 11,013 (2017 census). It is 409 hectares in area and has approximately 5,058 dwellings (2011 census).

It is the third tier of government after parliament and Dorset Council. Its legal powers are granted to it and regulated by various government acts. Blandford Forum Town Council is the first council in Dorset to be awarded with Quality Gold Council Status.

The Town Council supplements the provision of local government services in Blandford Forum. It provides a range of social and recreational facilities. Its aims are to promote and represent the town with other national and statutory bodies. The Town Council acts as a consultee and lobbying force with the Dorset Council and regional and national government, putting forward the wishes and needs of the local community. The Dorset Council  covers the whole of the county except Bournemouth and Poole. Its main responsibilities include education, social services, highways, strategic planning, libraries, development control, environmental health, refuse collection, economic development, tourism and major recreational facilities such as the Blandford Leisure Centre. The Dorset Council consults with the Town Council on such subjects as the County Structure Plan, the Local Transport Plan, the Mineral and Waste Local Plan, the Local Plan, planning applications within Blandford Forum and the economic development strategy. 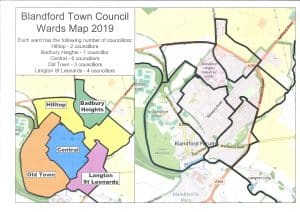 The Mayor and Chairman roles will be filled by one Councillor.  The Chairman’s responsibility is to ensure that effective and lawful decisions are taken at meetings of the council. They also ensure that Councillors are fully informed in order to make decisions. They are often the public face of the Council. The Mayor attends many functions arranged by local organisations throughout their year of office. It is a demanding role, but one that is very worthwhile as there is so much contact with the public. In the absence of the Mayor, the Deputy Mayor will preside at meetings and attend functions. However they do not wear the robes or chains of office as they are only deputising for the Mayor.

The Town Council’s Officers are made up of a team of 16 staff.