The names of 117 local, fallen servicemen from the Great War 1914-1918, are inscribed on the two war memorials on the Town Hall in the Market Place.

During this centenary year of the Armistice (1918-2018), the Town Council has prepared 117 rocks, one with each serviceman’s name on.

Those who find the rocks are asked to post a picture of the rocks on the Blandford Rocks Facebook Group and to rehide them.

The information about each serviceman has kindly been provided by Dr Peter Reder, so they are no longer just names on a memorial but local men – fathers, sons and brothers – with a story to tell. Further evidence has been provided by William “Bill” Lovell and Mel Pollock.

Acts of Remembrance in Blandford Forum 2020

Remembrance was not cancelled, but we had to plan events differently this year, to ensure we do so safely, and we encouraged people to Remember at Home.

Please take a few minutes to watch this video during a period of reflection, reminding us of the various conflicts and how Blandford Forum Remembers.

Friday 6th November
Local schools have laid crosses in the Field of Remembrance within the churchyard of St Peter and St Paul. However, this year, there was no civic service to mark this event and schools laid their crosses at separate times to avoid creating a gathering.

Remembrance Sunday – 8th November
With the parade, brass band, troops, and civic church service already removed from the event, the Town Council had been working towards a reduced outdoor service in the afternoon, to include wreath laying by the various local groups and organisations who would usually attend this event. We delivered newsletters to all properties urging members of the public to observe Remembrance in a personal and private manner this year.

However, this reduced service was brought forward to Wednesday 4th November 2020 in light of the Prime Minister’s briefing held on Saturday 31st October 2020 and the new restrictions from 5th November 2020. Wreath layers were invited to lay throughout the week instead of during the outdoor service.

Available for you to view are a video of the reduced service, the Order of Service and photos taken by resident, Pat Patrick.

Armistice Day – Wednesday 11th November at 10.45am
Armistice Day is the day which marks the end of the First World War when the guns fell silent. The Mayor of Blandford Forum, Cllr Lindsay joined the national two minute silence, from home, at the eleventh hour on the eleventh day of the eleventh month. Cllr Lindsay is pictured below, laying her wreath at the Town Hall memorials.

The Royal British Legion also has a recording.

The Mayor, Cllr Lindsay was invited to The Blandford School where they held a poignant Act of Remembrance with the silent soldier donated by the town council. Cllr Lindsay is pictured with the Headteacher Sally Wilson and students from the school.

You can download the Every Poppy Counts poster to colour in… 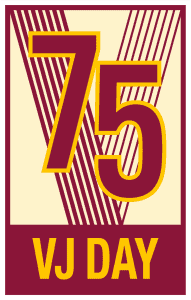 Marking the 75th anniversary of Victory over Japan Day at home.

Saturday 15th August 2020 was the 75th anniversary of Victory over Japan Day, marking both the surrender of Japan and the end of the Second World War, when we remember and recognise all those who served and sacrificed in the Far East and ultimately brought an end to the Second World War.

There was a national moment of Remembrance at 11am. In Blandford Forum, the Mayor of Blandford Forum, Cllr Lindsay attended a small service, organised by the Royal British Legion Blandford & District Branch, to mark the 75th anniversary of VJ Day. 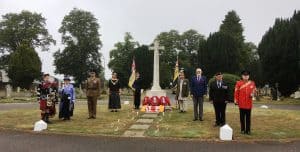 Cllr Lindsay commented that, ‘The 2nd Dorsets Regiment were involved in the fighting in India, notably at Kohima and residents will be aware of Kohima Court in Blandford Forum. In fact the 2nd Dorsets, along with the Divisional HQ Staff of 2nd Division, broke the Japanese forces advance and pushed them back at Kohima and this is considered the turning point in the Far East war. This significant anniversary is an occasion for us to acknowledge that debt once again – to the Veterans of the campaign, to all those who lost their lives, and to the many military Prisoners of War and civilian internees who suffered in captivity and not to forget their families who suffered back home in their own way.’
Cllr Lindsay laying a wreath at the Cross of Sacrifice, whilst Piper Roger du Barry plays.
The Town Crier’s Cry for VJ Day 75
For more information, please visit VE Day & VJ Day: Marking 75 years since the end of the Second World War

© IWM (D 25636) Civilians and service personnel in London’s Piccadilly Circus celebrate the news of Allied Victory over Japan in August 1945. 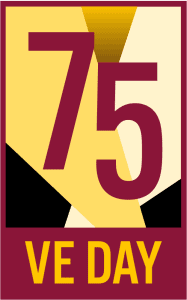 Marking the 75th anniversary of Victory in Europe Day at home.

Message from the Mayor of Blandford Forum, Cllr Lynn Lindsay.

Join Geordie Thomson to pay tribute to the heroes of WW2 in a silence.

Raise a glass with the nation and watch a fanfare by Geordie Thomson on the Town Council’s social media channels along with Winston Churchill’s speech, followed by piper Roger du Barry playing Battle’s O’er and The Flowers of the Forest.

8:00pm The People’s Celebration on BBC1

On Sunday 10th May the online service from the Blandford Forum Parish Church will have a VE Day focus. It can be viewed via the BFPC website or their Facebook page.

Things you can do…

* Make your own bunting!
* Decorate your home and windows in red, white and blue!
* Explore the RBL’s free VE Day home learning resources.
* Download a free party pack from the English Heritage website.

Winston Churchill’s speech to the nation:

This is your victory! It is the victory of the cause of freedom in every land. In all our long history we have never seen a greater day than this. Everyone, man or woman, has done their best. Everyone has tried. Neither the long years, nor the dangers, nor the fierce attacks of the enemy, have in any way weakened the independent resolve of the British nation. God bless you all. . . . . .and later . . . .

My dear friends, this is your hour. This is not victory of a party or of any class. It’s a victory of the great British nation as a whole. We were the first, in this ancient island, to draw the sword against tyranny. After a while we were left all alone against the most tremendous military power that has been seen. We were all alone for a whole year. There we stood, alone. Did anyone want to give in? Were we down-hearted? The lights went out and the bombs came down. But every man, woman and child in the country had no thought of quitting the struggle. London can take it. So we came back after long months from the jaws of death, out of the mouth of hell, while all the world wondered. When shall the reputation and faith of this generation of English men and women fail? I say that in the long years to come not only will the people of this island but of the world, wherever the bird of freedom chirps in human hearts, look back to what we’ve done and they will say “do not despair, do not yield to violence and tyranny, march straightforward and die if need be-unconquered.”

A Cry for Peace Around the World! Town Criers were asked to proceed with a lone cry, which Deputy Town Crier Liz Rawlings did by filming it well in advance. Liz, being a poet, adapted some of the suggested wording to make it a truly fitting cry for Blandford Forum, and here is the wording she ‘cried’:

On VE Day this Cry for Peace comes deeply from our hearts
As we remember old and young who bravely played their parts
In the tragedy of the Second World War, that caused such devastation
To the lives and hopes and happiness of an earlier generation.

Wives and mothers, sisters too, did not sit idly by and grieve
But took on all the essential jobs their menfolk had to leave,
Working hard and tirelessly to keep the home fires burning –
Praying all the while that their men would be returning.

The joy in May of ’45 isn’t hard to comprehend
As six long years of wretchedness came finally to an end.
May the suffering and deprivation never be in vain . . .
They gave their all so our generation could freely live again.

We celebrate VE Day as a reason to remember
Beyond the solemn wreaths of the eleventh of November.
Don’t put away those poppies, don’t let the memories fade,
But think of ALL the sacrifices that EVERYBODY made –

Acknowledging the debt we owe – may their colours fly unfurled
As we join together in our cry. . . ‘PEACE TO THE WORLD!’ 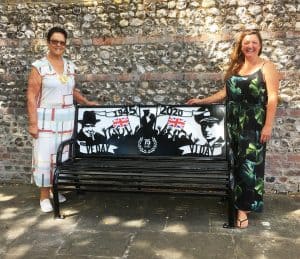 The Town Council has approved a design for a new VE Day / VJ Day 75 bench, which has been fabricated, and will be installed in the Tabernacle in due course. This was created by a local designer and is therefore exclusive to Blandford Forum. A mock-up of the design is pictured. It features the Prime Minister and Monarch at the time, people cheering, the Union flags and a couple kissing, which are all images associated with the period.

This website uses cookies to improve your experience while you navigate through the website. Out of these, the cookies that are categorized as necessary are stored on your browser as they are essential for the working of basic functionalities of the website. We also use third-party cookies that help us analyze and understand how you use this website. These cookies will be stored in your browser only with your consent. You also have the option to opt-out of these cookies. But opting out of some of these cookies may affect your browsing experience.
Necessary Always Enabled

Any cookies that may not be particularly necessary for the website to function and is used specifically to collect user personal data via analytics, ads, other embedded contents are termed as non-necessary cookies. It is mandatory to procure user consent prior to running these cookies on your website.