Freedom of the Boroughs

The origin of the Freedom of Cities and Boroughs dates back to the early Roman Empire when to be “born free” as a Citizen of Rome contained many privileges and rights superior to those of any other city, although it did not secure exemption from taxation.

This distinction was continued in the very early history of Britain in the Saxon constitution until about 600AD. Upon the Norman Conquest, William the Conqueror introduced the feudal system, and in 1069 he granted the Burgesses of London a charter guaranteeing them their ancient laws and privileges.

Even in Saxon times “Guilds” of men of the same trade existed for mutual aid and protection, which was continued by the Normans, and the members were Freemen who were admitted only after a long apprenticeship.

In many ancient Cities which had been granted charters by successive sovereigns none but Freemen were allowed to trade wholesale and retail, which was, perhaps, their greatest privilege. Freedom could be secured originally in three ways – by patrimony, Apprenticeship of Redemption – but of more recent years, admission would be claimed by gift or marriage, and Freemen’s Courts were held until towards the end of the last century for admission of  Freemen, which conferred a right to a parliamentary vote, and in some towns exemption from tolls and dues according to the ancient customs retained by charter.

Before the Representation of the People Act 1832, in many Parliamentary Boroughs the Electors consisted solely of the Freemen. By virtue of the Municipal Corporation Act 1835, the Freemen ceased as such to form a part of the body corporate.  The Act, however, respected existing usages and retained a right to share in the corporate property, commons and public stock. Freedom by gift and purchase are now abolished and birth, serviture or  marriage only, entitle one to be entered on the “Freeman’s Roll”.

It was the practice to confer the honorary Freedom of the Borough as a mark of distinction upon a person whom the Council wishes to honour because he is a person of distinction, or one who has rendered eminent services to the Borough. It was first recognised by the Honorary Freedom of Boroughs Act 1855, now replaced by the Local Government Act 1933.

It does not confer any of the benefits previously possessed by Freemen: but the rare distinction of the honour of Freedom in more recent times is a reflection of the value and importance that accrued to it in ancient times socially and financially, and the credit and reputation of it is thus preserved and recognised in honorary promotion for eminent services at the present day.

The practice of conferring the honorary “Freedom of Entry” upon Regiments is a fairly recent one; indeed the earliest grant appears to have been in December 1943, when the Corporation of Sheffield conferred the honour upon the York and Lancaster Regiment.    However, its roots lie deep in the history of local and central government; indeed it affords an interesting example of the power and influence of the old boroughs and cities in relation to central government in the past. Of these, the cities of Edinburgh and London are the most notable.

When the Army required more men, the custom was to send a recruiting officer and party to various towns, and draw public attention by the steady beat of a drum.  In these cities – and there were others – permission had to be obtained by the Army from the Corporation to enter and “beat the drum”.  This permission came to be granted “in solemn form”.  It was also necessary to obtain the consent of the Corporation before troops could march through towns.  Hence arose the practice of conferring, as a matter of honour upon individual Regiments the right “to march through the town with bayonets fixed, drums beating and colours flying”.  From these ancient practices, the modern grant of “Freedom of Entry” can be traced.

To honour Blandford Soldiers who fought in the Boer War.

Duties include representing the town by attendance at civic events, within and outside of the town, and providing support to the Mayor.
A knowledge of the town’s history, civic procedures and the civic silver collection is required. An annual honorarium of £400 to the Mace Bearer and £300 to the Deputy Mace Bearer is paid, however no expenses will be covered except for the cost of membership to the Guild of Mace Bearers.

Pictured on the left is Mace Bearer David Jardine and on the right, Deputy Mace Bearer James Watling. 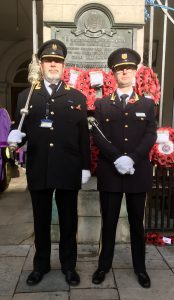 Duties include representing the town by attendance at civic events within and outside of the town. which includes organising the Town Crier’s regional competition as part of the Georgian Fayre. There are opportunities to represent the town by travelling to other Town Crier events across the South. An annual honorarium of £300 to the Town Crier and £200 to the Deputy Town Crier is paid, however no expenses will be covered except for the cost of membership to the Guild of Town Criers. 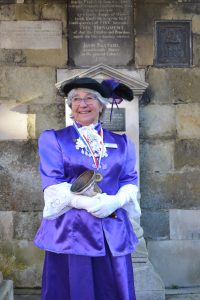