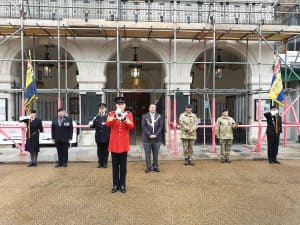 Geordie Thomson played a fanfare during the raising of the flag 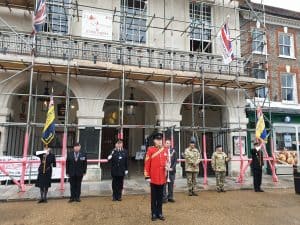 The Mayor of Blandford Forum, Cllr Lee Hitchings and Mace Bearer, David Jardine were joined by the Deputy Commander, Lt Col Richard Dyer and the Garrison Sergeant Major, Louis Simpkins WO1, from Blandford Garrison.
The Chairman of the RBL Blandford & District Branch, Terry Clarkson was also in attendance with Tony Lucas, Branch Standard and Marie Parsons, RBL Women’s Section Standard.
On this occasion, the Mayor took the opportunity to sign the Armed Forces Covenant, witnessed by the Deputy Commander. 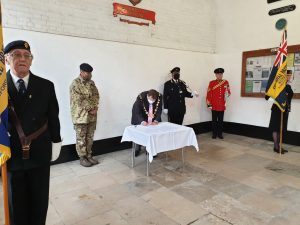 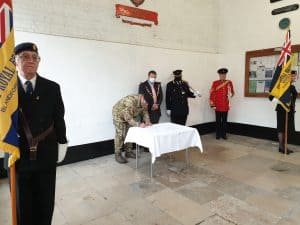 The Town Council has pledged to the Armed Forces Covenant – a promise that those who serve or have served, and their families, are treated with fairness and respect in their communities, economy and society for which they serve with their lives.
There is an excellent partnership already in place between the Garrison and the Town Council, but this voluntary pledge strengthens the existing link and helps to raise awareness of the immense contribution that those who serve, or who have served, and their families, make to everything we do.
Cllr Lee Hitchings remarked that, “We are fortunate in Blandford to have the Garrison nearby and the town truly benefits from their presence. The least we can do is pledge to support them in return.”
Businesses are encouraged to pledge their support and can find more information at the following links:
www.dorsetcouncil.gov.uk/your-community/armed-forces-covenant/the-armed-forces-covenant.aspx
www.armedforcescovenant.gov.uk

The Armed Forces Community includes all that are currently serving in the Armed Forces, Veterans, Reservists, Cadet Force Adult Volunteers, the wounded, injured and sick as well as spouse/partners and dependants.

There are four military bases in Dorset:

Bovington (as a base includes the barracks of Allenby, Stanley and Lulworth)
Blandford
RM Poole
West Moors

In Dorset there are approximately 6,500 serving members of the Armed Forces, around 58,000 Veterans, and as of September 2019, 1,325 children from Armed Forces families attend school here.