A display board was installed (and unveiled in 2014 by the Mayor Bob Brannigan) near the Commonwealth War Graves. This board was part funded by the Military Community Covenant Fund. It is located between the two large War Graves sections (see below) so that visitors can learn information about the burials, which are listed on the board along with a location point so that visitors can locate specific graves with ease. Please click on the Casualty Report Information Board to view the details on the board.

Gone, but not forgotten.

You may also be interested in viewing the  Remembrance page. 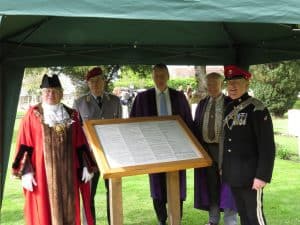 Blandford Forum cemetery has a Commonwealth War Graves Section containing 69 graves dating from 1915 to present day. The graves are Royal Navy, Royal Flying Corps, Royal Air Force, Army, Canadian Air Force and German Air force. There are 50 Commonwealth burials of the 1914-18 war, one of which is an unidentified seaman. There are a further 20 burials of the 1939-45 war. In addition, there are 9 German burials and 6 non world war service burials.

These graves are beautifully maintained by the Commonwealth War Graves Commission.

Two silent soldiers were added to the areas in 2020 (pictured). 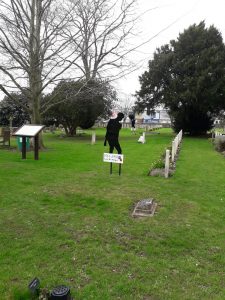 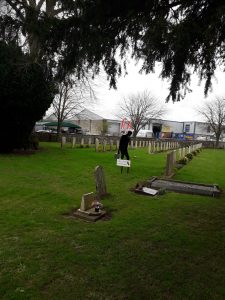 The WWI memorial is located in the central area within the entrance to the cemetery.

The inscription is as follows:

This cross was erected together with the tablets in the Market Place in 1921. 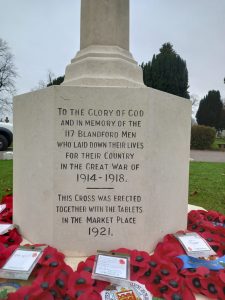 Also to the glory of God and in memory of the 43 Blandford men who laid down their lives for their country in the Great War of 1939 – 1945. 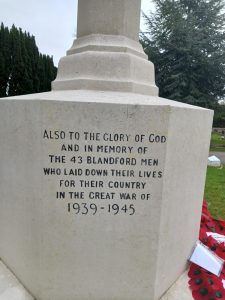 The cross of sacrifice was last cleaned in 2021.

An additional inscription was also added in 2021 to mark the centenary of the memorial, which reads:

A rededication service was held in 2021 to mark the centenary of the cross and tablets, and to remember all men and women of Blandford Forum fallen in service to their country 100 years on.