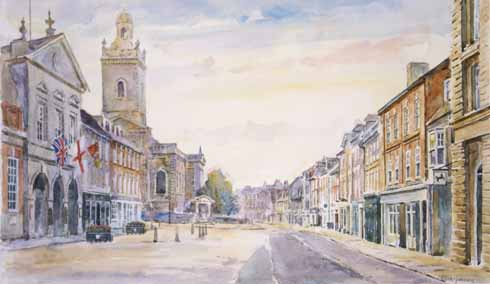 The Town Council’s portraits of master builders John and William Bastard have been restored to their former glory with the support of the Veneziana Fund. The brothers and their family firm were major figures in the re-building of Blandford Forum after the Great Fire of 1731 and their portraits have hung in the Town Hall since 1890. The restoration revealed that William had curiously been painted sporting a black eye! At first it was thought that the darker patch was simply dirt that had accumulated over the years but further research revealed that it related to a bitter dispute over the completion of the parish church of St. Peter & St. Paul in the Market Place. The brothers were responsible for the design of the main body of the church and proposed a spire to complete the building. This was never built due to lack of funds. Instead another builder, possibly Nathaniel Ireson of Wincanton, topped the tower with a cupola much to the Bastards’ disgust. Blandford Forum’s Mayor, Steve Hitchings said “the paintings are an important part of Blandford’s heritage and we are delighted that they are back in the Town Hall looking so wonderful. We could not have done it without the kind support of the Veneziana Fund and the generosity of their funders, the customers of Pizza Express.” The Town Council has started fundraising for its major project to restore the Town Hall and Corn Exchange buildings to ensure that they can provide quality facilities for generations to come.

The Cupola Project spearheaded by Sara Loch, is working hard to raise funds. She said “it was exciting to find out that the cupola caused such controversy. Hopefully William’s shiner was symbolic and the rival architects didn’t actually come to blows!” Whilst both projects have their individual fundraising programmes they also combine with the town’s museum to put on town centre heritage regeneration events. Look out for the sail banners in the Market Place – a sign that’s something’s taking place and visit the Blandford Regeneration Website for further information

This website uses cookies to improve your experience while you navigate through the website. Out of these, the cookies that are categorized as necessary are stored on your browser as they are essential for the working of basic functionalities of the website. We also use third-party cookies that help us analyze and understand how you use this website. These cookies will be stored in your browser only with your consent. You also have the option to opt-out of these cookies. But opting out of some of these cookies may affect your browsing experience.
Necessary Always Enabled

Any cookies that may not be particularly necessary for the website to function and is used specifically to collect user personal data via analytics, ads, other embedded contents are termed as non-necessary cookies. It is mandatory to procure user consent prior to running these cookies on your website.