Certificates of Appreciation and Mayor’s Commendations

The outgoing Mayor, Cllr Lynn Lindsay presented Certificates of Appreciation in her last week as Mayor to members of the public who had been nominated. 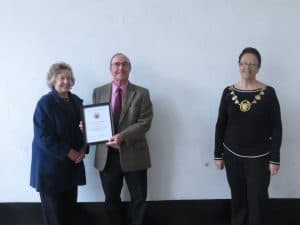 Derek Andrews (pictured with is wife) was nominated by Cllr Osborne. There have been many standout contributions during the pandemic which I hope are also acknowledged, but I’d like to put Derek Andrews forward. Derek has been at the forefront of the Covid response in Blandford, organising volunteers to support the vaccine roll out at Whitecliff Surgery. It’s widely been recognised as a slick operation, for which Derek must take some share of the credit. 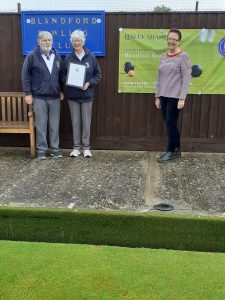 Sid and Joy Steele were nominated by Cllr Osborne. Sid and Joy provide bowling coaching for young people from age 4 right up to young adults. They have made a huge contribution to the sport, the young people of Blandford and the team of volunteers of all ages that support them every week. They create a culture that is fun, vibrant, focused and inclusive. Because of this it is understandable that youth membership and participation in Blandford is much higher than in other towns’ clubs. 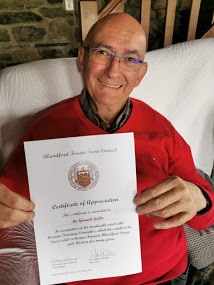 A certificate is being sent to Mortain for Yannick Guillo –who was nominated by Francois Letondu via the Town Council’s Facebook page. Francois said ‘Yannick Guillo was for many years responsible for the exchanges between Blandford Forum and Mortain in the twinning committee, many inhabitants of Blandford stayed with him and his wife.’
The Mayor handed out Commendation certificates to Anne Bennett, Valerie Foster, Becky Rodwell and Tara Eren. These four ladies were awarded certificates in recognition of the great support they provided to the Mayor in her Mayoral Years. 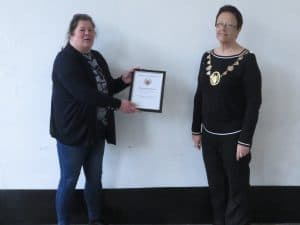 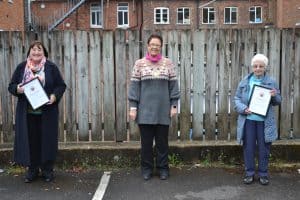 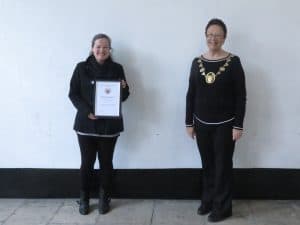 She also presented staff from the Blandford Group Practice with a Mayor’s Commendation certificate in recognition of the successful roll out of the Covid-19 vaccinations. 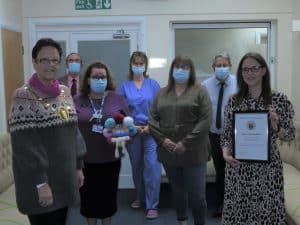 At the Mayor Making ceremony on Friday 10th September 2021 the outgoing Mayor, Cllr Lynn Lindsay, presented Mr Gerald Mosney with a certificate of appreciation for his contribution to education and local organisations. 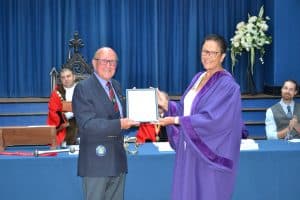